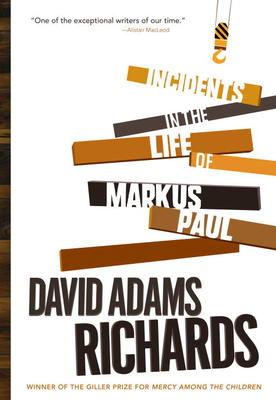 This is the story of an accident down at the wharf of a First Nations reserve in the Maritimes.

A seventeen year old Indian boy had his first job loading logs on the Dutch cargo shiop “Lutheran.” The load slipped and he was crushed. His white neighbour, also loading that day, is accused of killing him.

David Adams Richards devotes his book to the attitudes and prejudices of the dozens of people involved in this story. The Indian boy, unlike his peers, was heading for university to be a doctor, arousing jealousy among the less-educated boys. The white man, who lived on the very edge of the reserve boundary, had been abandoned by both parents and lived alone. He was known as a hard worker, generally, and quite well-liked by both whites and Indians. After a bitter story, he turns out to be the hero of this tale.

Richards takes us into the lives of a whole variety of types: the wise old chief, the well-meaning but disliked white officials — in a way that no newspaper account can ever give of what happens on the reserves. Richards has earned his reputation for penetrating the hearts and minds of his characters in books like “The Lost Highway,” “The Friends of Meager Fortune” as well as the celebrated “Miramichi Trilogy” and “For Those Who Hunt the Wounded Down.” His new book is a fine addition to the list.