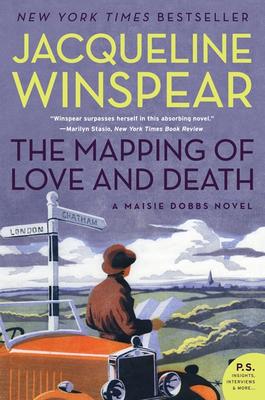 For anyone who knows the detective Maisie Dobbs, The Mapping of Love and Death will be a welcome addition to the highly successful detective series. For newcomers, the London investigator comes as a real treat to read.

Set in the U.K. between the wars, i.e. l932 to begin, the story follows the murder of a young American map-maker who left the U.S. in l9l4 to join up and fight for the country his father had come from, England. Jacqueline Winspear is an English writer who has lived for a long time in California. The result is that she has very keen feelings for both countries. From the sunny warmth of her new home, she writes vividly of the wet smog of London on winter afternoons, and the endless cups of tea and scones in everyone’s homes.

Maisie herself is a bright young woman who once worked as a maid on a large estate before she was trained to be a public investigator. She has a natural charm that enables her to slip between the class barriers and get the information she seeks.

The narrative is ingenious and sometimes horrifying in its ramifications but written in a low-key British way that takes you very close to the families concerned and makes for a page-turning read. This is the seventh book in this series that Winspear has produced, many of them winning prizes.