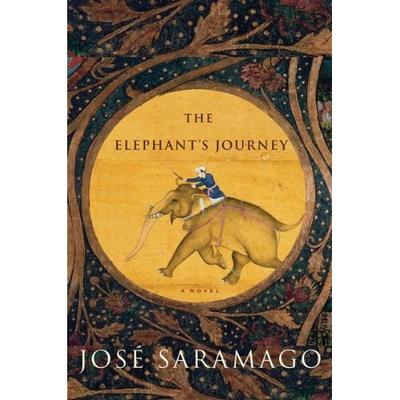 The renowned novelist, Jose Saramago, has written an enchanting story about a true journey, taken in l55l. King Joao lll of Portugal wanted to give a special wedding present to his cousin , Maximilian, Archduke of Austria. He had an elephant and his keeper in his possession and felt it would be an appropriate gift. How to get it to him?

Behind a commanding officer, a convoy of soldiers and labourers, with an oxcart to carry water and forage set out with the elephant and keeper, or mahout, by foot to go from Lisbon to the city of Valladolid in Spain. Here they were met by the archduke and his new wife and continued, to much consternation and celebration along the way, as well as threats from wolves in the surrounding hills. The elephant, called Solomon, has his name changed to Suleiman, and the keeper, called Subhro, becomes Fritz. Originally from India, the keeper has interesting exchanges with his Christian travelers about the Hindu religion which has an elephant head for one of its gods, Ganesh.

The caravan crosses the Mediterranean by ship with no trouble to Italy and then makes its way north through the cities of Genoa, Placenza, Verona, Venice and Trent. Along the way the elephant learns to kneel before authority; at one point he inadvertently kicks a priest. They make a triumphant entry into Vienna. Saramago fills the story with warmth and humour. It’s a gentle, magical tale for Christmas.