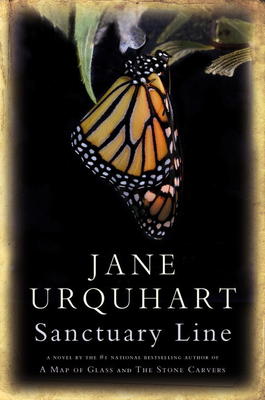 You don’t connect racial tension with the shores of Lake Erie, in rural southern Ontario. But Jane Urquhart’s new novel tells of unexpected violent trauma on these beautiful shores that colours the lives of the fifth and sixth generations who live there.

The heroine of her story, Liz Crane, is an entomologist whose job is to study the complex routes of the Monarch butterfly as it leaves Sanctuary Research station for points south, and back again. The job gives Crane a chance to leave Toronto and live in the old farm-house she has known all her life as a summer visitor. With the familiar enviroment come back to her memories of her own growing-up days. She remembers the tempestuous, charismatic Uncle Stanley whose disappearance has never been explained. She looks back to the days when the farm lands planted strawberries, cherries, peaches, pears, tomatoes, apples in a strict rhythm of ripening, which was then gradually brought down to orchards only. She recalls the crumbling bunk-houses that used to house the Mexican workers flown up each year. She is on her own in the old farmhouse, with her mother not far away in a suitably named retirement home, The Golden Field. It makes the memories all the more vivid.

Urquhart writes skilfully and moodily about the Butler family’s long-ago life in poverty-stricken Kerry, Ireland and their move to the new world. We are drawn in totally to all generations, one of the latest dramas being the death in Afghanistan of Liz’ close cousin, Mandy.

Jane Urquart is a well-known Canadian writer with a long list of prizes to her name. This is her seventh novel. She was born in Little Long Lac, Ontario, and now lives in Northumberland County, Ontario, and sometimes Ireland.