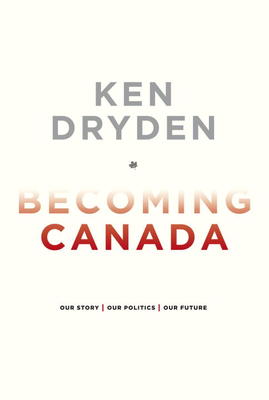 When it comes to talk of winning, best-selling author Ken Dryden knows what he is talking about. From l97l-l979 he was goal-tender for the Montreal Canadiens hockey team, during which time the team won six Stanley Cups.

Since then, Dryden was elected to the House of Commons in 2004, and re-elected as Member of Parliament in 2008. All this time he has watched Canadians accept themselves as easy-to-get-along-with but a bit self-deprecating and unambitious. In this book he writes about contemporary Canadian politics: the Liberal leadership race, the Conservative minority governments, prorogation, even the Vancouver Olympics. He points out that partisan politics often spoil the bigger story – of what Canada might do in the global world of climate change, starvation, peace-keeping. He thinks that if we realized more clearly what we have already achieved at home, outgrowing the Two Solitudes, taking in immigrants who know a new Canada, we would stop being a “Yes..but ” country and grow into a country of the heart and imagination with confidence to speak out with our own voice.

Dryden has written four best-sellers, including “The Game”. In this new book he talks about the Own the Podium slogan of the Vancouver Olympics – not in the way public relations picked it up but the way the athletes performed – clear-eyed, unrattled, and winning medals. He would like to see the rest of us behave this way.