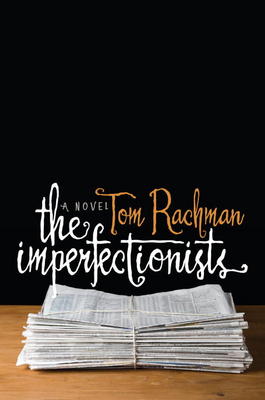 This is a brilliant book on the workings of a newspaper, inside and out.

Tom Rachman has been a foreign correspondent for the Associated Press stationed in Rome and also worked as an editor at the “International Herald Tribune” in Paris. He knows what he is talking about, with his tough lady editor-in-chief, pathetic obituary writer, stubborn copy editor. Because he still lives in Rome he gives the whole book a deep sense of that beautiful city:- its squares and magical out-of-the way corners to rendezvous, its special love of food and wine.

The chapters focus on specific characters and their sometimes topsy-turvy lives; they can almost be read as short stories. But gradually the inter-personal relations come very close and poignant and we feel the drama, not only in their personal lives, but in the struggle to keep the paper going in the days of encroaching Internet competition.

Tom Rachman was born in London and raised in Vancouver. He graduated from the University of Toronto and the Columbia School of Journalism. The reviewers praise a first novel of such scope and intensity from one so young.