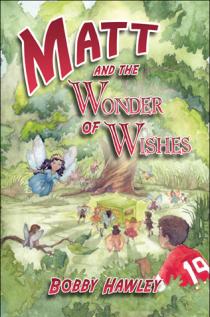 From a review on True North Perspectives;

“… Matt and the Wonder of Wishes by Nepean, Ontario author Bobby Hawley.

In this masterfully written book, Queen Zephania is the ruler of the fairy realm and can be found in the forest glade not far from a magnificent landscape of flowers. Should you become one of the chosen, you might even be given a wish. The fairies were attracted to this location by the display of colors and the heavenly scents coming from a beautiful garden right at the forest’s edge.

One night just before dusk a young lad by the name of Matthew spotted a box moving toward the forest glade, and on the side of the box was written an invitation to a wish. He followed the box and there he glimpsed the magical kingdom.

He felt sure he was one of the chosen, so the next day he returned with his young friends Jake, Katie, Danielle, Ana and Max. The Queen granted a wish to each child so that the special dream held in their hearts could be fulfilled.

Bobby Hawley is a retired teacher who loves working with children. She has published two children’s books on bullying since retiring and has frequented many schools, doing readings and discussing the importance of empathy. She has written and published a book of illustrated children’s poems as well as a couple of chapbooks.”