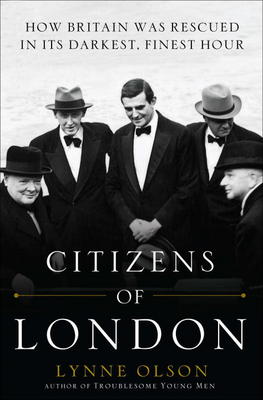 Lynne Olson has already written about how Britain was saved in its darkest hour in “Troublesome Young Men”. These were the men in England who fought appeasement and backed Churchill’s rise to power.

In her new book, Olson looks at the Americans who also rallied to England’s aid, at a time when she was on the brink of going under to the German blitzkrieg. It is once again – and probably forever – a totally intriguing and inspiring story. Olson calls her book quite suitably “Citizens of London”. She shows how three distinguished Americans, who had come to England with little knowledge and not too much respect for the country, fell totally in love with the people of London and their stoic bravery.

Edward R. Murrow was the head of CBC News in Europe; Averell Harriman was the millionaire who ran Roosevelt’s Lend-Lease program in London; and John Gilbert Winant was the idealistic U.S. ambassador to Britain. They were all Roosevelt appointments and not only backed his policies, but often pushed him further when the U.S. public tended to lag. Olson includes others: General Dwight D. Eisenhower and Tommy Hitchcock, a famous World War l fighter pilot who helped save the Allies’ bombing campaign again Germany.

The book conjures up the hectic hard-drinking cocktail atmosphere of London, as well as parties at Churchill’s home which led to scandal among these top men. But Olson never strays far from the ordinary people of her title. They were the ones who really won the war and when you read this you realize, once again, why.