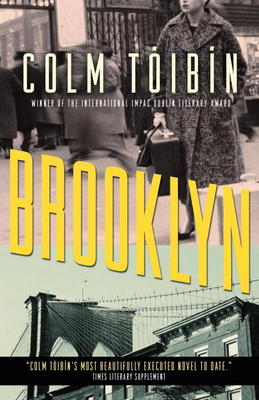 This is really the story of immigration – 50 years ago – from Ireland to the United States. It is interesting to us today as we watch immigration to our country changing from European to non-European, as the whole world ‘s population shifts.

Eilis Lacey couldn’t find a job in her small southern Ireland town in the unsettled days after World War ll. When a priest in New York, who knows her family in Ireland, offers her a job in Brooklyn, she accepts it. It means leaving a close-knit family, a charismatic sister she dotes on and a widowed mother. After intense loneliness in her new boarding-house in Brooklyn, she eventually finds her feet, is liked at work, as well as the local dances. Somewhat to her surprise romance enters the picture, and she is wondering what to do, when her sister “back home”, suddenly dies, and she has to make the trip to Ireland.

Toibin gets astonishingly close to his characters and is justly called “one of the most accomplished writers writing in English today”. This book is charming and we get very close to its unpretentious group of characters. We are even challenged on our ideas of switching loyalties.

Toibin lives in Dublin and has won awards for five major novels, including “The Blackwater Lightship” and”The Master”.