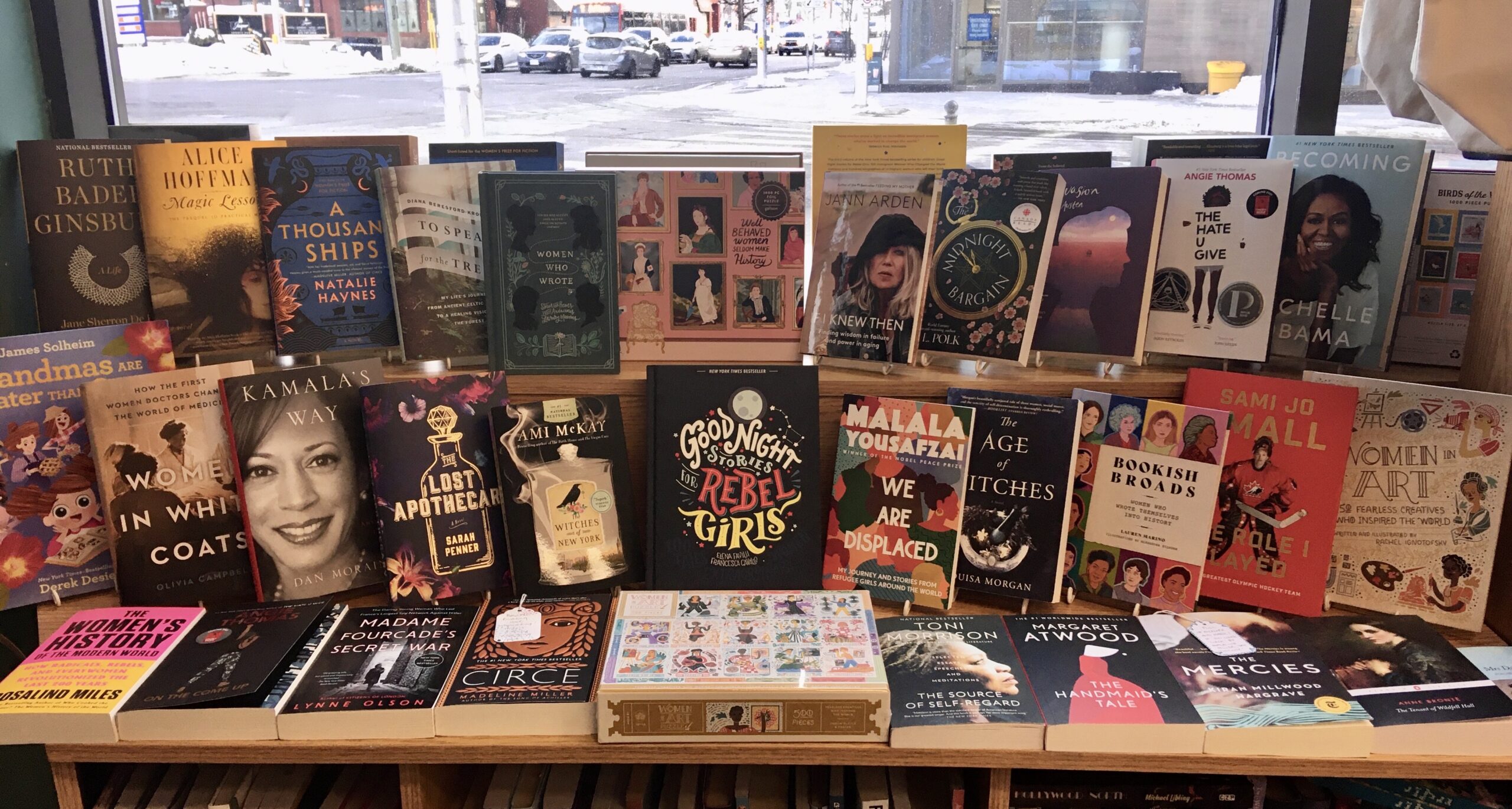 1. Hamnet and Judith by Maggie O’Farrell
2. Braiding Sweetgrass by Robin Wall Kimmerer
3. The Midnight Library by Matt Haig
4. A Gentleman in Moscow by Amor Towles
5. Shuggie Bain by Douglas Stuart
6. The Glass Hotel by Emily St. John Mandel
7. Deacon King Kong by James McBride
8. The Midnight Bargain by C.L. Polk
9. Our Darkest Night by Jennifer Robson
10. How to Avoid a Climate Disaster by Bill Gates

We’ve made it to March! It’s hard to believe that it’s already the third month of 2021! It seems like the days are just flying by! On the plus side, we are rushing towards spring, which could never be a bad thing. While it will be nice to see the grass again and watch the trees burst into life, we can’t cast our winter woollies off quite yet! Plus, winter does have a few good points to recommend it – the sparkle of freshly fallen snow, the smiling faces of happy snowmen, cozy days by the fire, marshmallow-filled hot chocolates, and long nights spent with a great book!

After all the hustle and bustle of Christmas time, the publishing industry tends to go a little quiet in January and February. There aren’t as many books being released and most of a bookseller’s time is spent restocking after the holidays and generally getting ready to start the whole cycle all over again. For us, part of that starting over included doing our annual inventory and then meeting virtually with our publisher sales reps to learn about what great new books are coming up over the spring and summer. In light of those two events, our February Newsletter never really came to be, for which we apologize. We hated to miss an opportunity to tell you about what was going on at the shop, but hopefully this first “spring” newsletter will make up for it.

One little bit of news we’re excited to share with you is that we reopened for in-store shopping this past month! From 10:00am to 5:00pm Tuesday through Saturday, you can now come and visit us in person. We’re still observing a limit of 4 customers in the store at a time and masks are still required to enter. There’s also hand sanitizer at the door that we ask everyone to use before coming in. If you’re not comfortable coming in to do your shopping, curb-side pick-ups will still be available during open hours, as well as on Mondays from 10:00am to 5:00pm. Orders can still be placed online (store.booksonbeechwood.ca), by phone, and via e-mail, as well as in person. While we’re happy to be welcoming you back into the store, things are still a little uncertain out there and there is a chance that we’ll be shut down again. Should that happen, we will definitely do our best to continue to provide you with all the books you need, want, and wish for! Fingers crossed that it doesn’t come to that again, but if it does, we’ll all get through it again together!

We don’t know about you, but the books we’ve been most drawn to in recent weeks (and, in all honestly, most of the time) are historical novels. There’s just something about falling not only into a great story, but into a different time that we can’t get enough of! One of our favourite historical books from last year was The Mercies by Kiran Millwood Hargrave and it’s just hit our shelves again as a brand new paperback! Set in a small Norwegian town in the 17th Century, this riveting novel tells the story of two women, each faced with incredible obstacles, who are inextricably drawn together through chance and tragedy. When an otherworldly storm breaks over the coastal village of Vardo, it claims the lives of all the men who had been out at sea, leaving their wives, sisters, and daughters alone to fend for themselves. Although the women manage to keep the village running, the eyes of nearby magistrates soon turn their way and a foreboding Scotsman (and his new bride) is sent in to set things right. Full of dangerous men, determined women, and rumours of witchcraft in the air, we’re sure you’ll enjoy this journey to the icy shores of 17th Century Norway! Based on the true World War II story of the American Library in Paris, The Paris Library by Janet Skeslien Charles takes us not only on a historical adventure, but also highlights the importance of books and the important role they play in our lives. At the outbreak of the war, Odile runs the risk of losing everything she holds dear – her beau, her best friend, her brother, and her beloved job at the library – so she and her fellow librarians decide to join the Resistance in an effort to protect the things they treasure most. Many years later, Odile finds herself living in Montana where Lily, a lonely teenager in want of adventure, sets out to discover the truth about Odile’s mysterious past. Shot through with a love of books and dark secrets borne to the surface, this wartime historical novel will keep you entranced from beginning to end!

Though none of us are doing any travelling right now, that doesn’t mean that we don’t want to read about it, and Julia Cooke‘s new book is the perfect one for the job! Come Fly the World is a fascinating look at the young women who worked as stewardesses for Pan Am World Airways from the mid-sixties to the mid-seventies. Although there were some prerequisites to working as a stewardess that we now consider demeaning (height, weight, age, etc.), applicants also had to have a college degree, be fluent in at least two languages, and possess a certain amount of political savvy. Often entrusted with the care of high-ranking government officials and privy to delicate information, stewardesses were also known to sometimes play important roles in political maneuvering and conflicts such as the Vietnam War – ferrying soldiers back and forth from the frontlines and helping evacuate refugees. Focusing on the lives of six women, this book is an intriguing look back at what many consider to be the Golden Age of air travel. Over the last year, we’ve all learned a lot about ourselves, our world, and how we treat others when under extreme stress. We’ve also seen the rise of many prominent new figures (in healthcare and beyond) who have been doing their best to lead us through these strange and uncertain times. One of them is British Columbia’s Provincial Health Officer, Dr. Bonnie Henry. For the last twelve months, she has shown us what it means to be compassionate, kind, calm, and brave in the face of unprecedented world events – she’s even had a designer shoe named after her! And now, with the publication of her newest book Be Kind, Be Calm, Be Safe, which she co-wrote with her sister Lynn, we’ve been given a look into the four weeks that changed our lives forever and the incredible woman who helped guide us through.

With spring finally starting to creep in, the book industry is kicking into gear again. As a result, we have been inundated with great new books that we can’t wait to read! Here are some of the recent and forthcoming releases that have caught our attention: Trip of the Dead by Angela Misri, Like Home by Louisa Onome, Shy Willow by Cat Min, Anonymouse by Vikki VanSickle, Prey by Ayaan Hirsi Ali, A Court of Silver Flames by Sarah J. Maas, The Girl From the Channel Islands by Jenny Lecoat, Gone to the Woods by Gary Paulsen, The Centaur’s Wife by Amanda Leduc, The Survivors by Jane Harper, Endpapers by Alexander Wolff, The Beekeeper’s Daughter by Santa Montefiore, The Echo Wife by Sarah Gailey, Dress Codes by Richard Thompson Ford, A Bright Ray of Darkness by Ethan Hawke, Animal, Vegetable, Junk by Mark Bittman, The Mysterious Disappearance of Aidan S. (as told to his brother) by David Levithan, The Third Man by Neville Thompson, Good Neighbors by Sarah Langan, No Buddy Like a Book by Allan Wolf, Black Magic by Chad Sanders, Return of a Trickster by Eden Robinson, Chain of Iron by Cassandra Clare, Klara and the Sun by Kazuo Ishguro, The Committed by Viet Thanh Nguyen, Yolk by Mary H.K. Choi, The Rose Code by Kate Quinn, Rowley Jefferson’s Awesome Friendly Spooky Stories by Jeff Kinney(March 16), The Memory Collectors by Kim Neville (March 16), Values by Mark Carney (March 16), Dog Man: Mothering Heights by Dav Pilkey(March 23), Every Vow You Break by Peter Swanson (March 23), Libertieby Kaitlyn Greenidge (March 30), Elizabeth & Margaret by Andrew Morton (March 30), First Person Singular: Stories by Haruki Murakami(April 6), Deceptions by Anna Porter (April 6), Good Company by Cynthia D’Aprix Sweeney (April 6), Peaces by Helen Oyeyemi (April 6), When the Stars Go Dark by Paula McLain (April 13).

This coming Friday (March 19th) will be the one year anniversary of our closure last year due to the pandemic. It’s hard to believe that it’s been a whole year! Though the last twelve months have challenged us personally and professionally unlike any other time in our lives, we’re so glad that we’ve made it through and are still able to share our store and our love of books with all of you. For most of us, books have been our saving grace during this strange time – we’ve travelled to foreign lands, back in time, up beyond the Milky Way, and into the lives of some of the people we admire most in the world. The power of the written word aside, though, the real reason we’re still here is all of you. Your support, love, and enthusiasm for books are what have kept us going – during every dark day during the first lockdown when we were a lowly team of one, when we were trying to figure out how to reopen again last summer while keeping everyone as safe as possible, and through the peaks and valleys of the holiday season. It’s been a tumultuous year to say the least and you have all been stars! We are so blessed to have such wonderful customers and we wouldn’t be here without you. Thank you for everything!

From our book family to yours, we wish you another month filled with health, happiness, and great books! 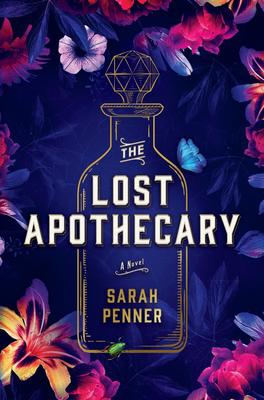 What I’m Reading: The Lost Apothecary by Sarah Penner

“Although they say that you shouldn’t judge a book by its cover, this one looked so appealing that nothing was going to stop me from reading it! The fact that it was a historical novel set in London and centred around a mysterious female apothecary was the cherry on top! Full of fascinating characters and vivid descriptions that make you feel like you’re exploring all the nooks and crannies of 18th century London in person, this debut novel is as beautiful inside as it is on the outside. It’s a must read!”