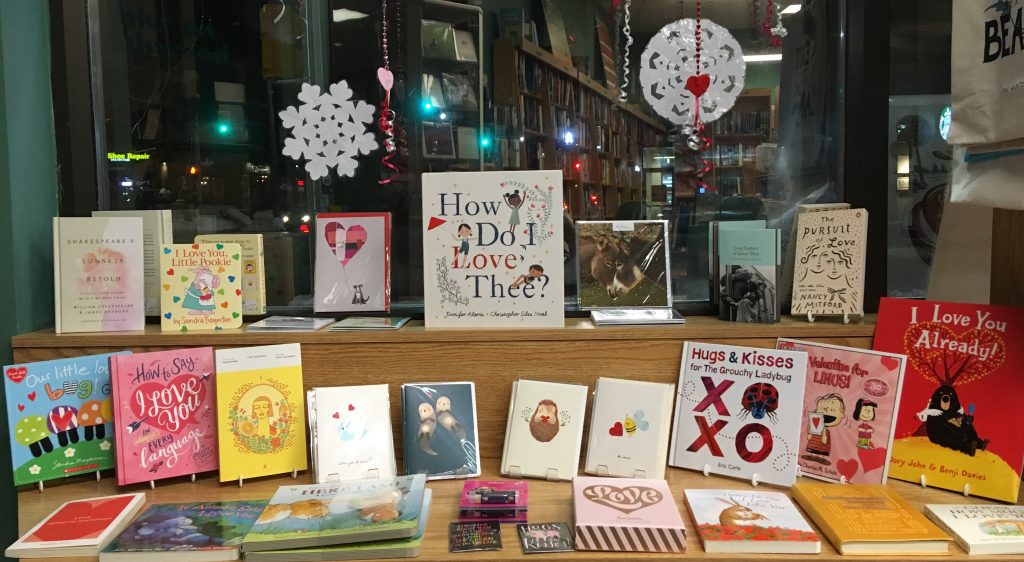 1. Crusoe the Worldly Wiener Dog by Ryan Beauchesne
2. Becoming by Michelle Obama
3. Washington Black by Esi Edugyan
4. Dog Man #6: Brawl of the Wild by Dav Pilkey
5. The Power by Naomi Alderman
6. Erebus by Michael Palin
7. Kingdom of the Blind by Louise Penny
8. The Trail Beckons by Malcolm Hunter
9. Macbeth by Jo Nesbo
10. Love and Ruin by Paula McLain

Welcome to the second month of the year! Although it’s often described as one of the sadder months – with the joys of the holidays behind us and a seemingly endless stretch of winter in front – there are still plenty of ways to keep our spirits up as we continue to trudge through snowbanks and skid down sidewalks. Chief among these spirit-boosters, of course, is the joy that a new book can bring! So, with our city still firmly in winter’s chilly grip, make us your one-stop shop for all your winter survival needs: cozy socks, perfect mugs, and lots and lots of books!

One happy day that we can look forward to during this slightly dreary month is of course Valentine’s Day! Traditionally celebrated as a day of romantic love, we are firmly in the “any love is good love” camp, be it for a parent, a child, a sibling, or a friend! And, although it could never be said that we are not huge fans of chocolates and flowers, it is equally true that we believe cards and books can convey just as much feeling as their more traditional counterparts. We have a wider selection of Valentine’s cards this year than we’ve ever had before, and a lovely collection of love-related books, so be sure to come by and see if you can find that perfect something for that special someone in your life.

Despite what the pundits might say, there are few mediums in the world today that are as versatile as the printed book. It can teach, thrill, haunt, entertain, and offer escape to those who need it; sometimes it can even do all those things at once! One historical fiction series which has pushed many of those buttons for us is Santa Montefiore‘s trilogy about the Deverill family. Centred around an old country estate in Ireland, The Last Secret of the Deverills closes out this sweeping family saga just as the threat of World War II becomes a reality. Predated by Songs of Love and War and Daughters of Castle Deverill, this entire series will find you caught up in the trials and tribulations of a fascinating collection of characters, some of whom you will love, some of whom you will hate, and some of whom you will love to hate! It is the perfect salve for anyone who’s been desperately missing Downton Abbey! With all the stories about strong, independent women that have been making their way into the store in recent months, Marie Benedict‘s novel about the life of Hedy Lamarr couldn’t be more well-timed. The Only Woman in the Room delves beneath the glamorous Hollywood veneer to the fascinating woman beneath. Both intelligent and beautiful, an unwitting spy and a scientist, Hedy Lamarr was undoubtedly a woman ahead of her time!

Winter, especially a winter like we’ve been having, is the perfect time to dive into an epic new fantasy series, and Man Book Prize winner Marlon Jameshas given us an amazing new novel that is not to be missed! Full of fantasy, history, mythology, and Marlon’s own unique imagination, Black Leopard Red Wolf has been touted as an African Game of Thrones. Set around the intriguing and slightly mysterious mercenary, Tracker, this epic fantasy takes readers on an unforgettable adventure through ancient cities and mystical forests as Tracker and his unlikely companions are hired by a slave trader to search for a child who’s been missing for three years. With a slight horror bent to it, Unbury Carol by Josh Malerman is at once a story of greed, trust, and love. Carol has only ever trusted two people with the truth of her strange condition: her gold-digging husband and her lost love. So, when she falls into one of her strange comas – a kind of sleep that is indistinguishable from death – there is only one person who can save her from her husband’s scheme to have her declared dead (and buried) in order to claim her fortune. With the darkness closing in and time working against her, Carol must hope that her own will to survive is enough to save her from her terrible fate should her love not arrive before it’s too late! From the brilliant mind that brought us the chilling novel BIrd Box (soon to be a show on Netflix), this new novel will keep you transfixed from beginning to end!

Amid the seemingly endless number of wartime novels sprouting up these days, it’s not quite as common to come across a true story as captivating as Larry Loftis’ new book Code Name: Lise. As WWII rages across Europe, Odette Sansom, a new agent with the Special Operations Executive, has finally managed to land safely in German-occupied France in order to meet with her commanding officer, Captain Peter Churchill. Together they complete mission after mission successfully, all while evading the clutches of German secret police sergeant Hugo Bleicher. It’s during this time, amidst the danger and subterfuge of a war-ravaged country, that the two fall in love. Even once Bleicher eventually captures Odette and Peter and sends them to concentration camps, their love and loyalty -for their country and each other – don’t waver. Successfully weaving this tale of true courage, patriotism, and love, Loftis has produced an unforgettable book that is deserving of a place on everyone’s reading pile! Leaping forward to the 21st Century, a time of “fake news” and ever-changing media platforms, be sure not to miss Jill Abramson‘s brand new book Merchants of Truth. To illustrate the ongoing battle between print and digital media, this fascinating book looks at four of the biggest players in the business – The New York Times, The Washington Post, BuzzFeed, and VICE – and addresses some serious societal issues that have cropped up over the last decade. A veteran of print media herself, Abramson‘s book is a fair, well-researched work that is a must for anyone who enjoys reading about current affairs.

As usual, there are so many new books and so little space in our newsletter to tell you about them all! Here are some more recent and forthcoming releases that we’re excited to have on our shelves: Find Momo Across Europe by Andrew Knapp; A Short History of Drunkenness by Mark Forsyth; There Are No Bears In This Bakery by Julia Sarcone-Roach; The Royal Rabbits of London by Santa and Simon Sebag Montefiore; On the Come Up by Angie Thomas; A Matter of Malice by Thomas King; A Cathedral of Myth and Boneby Kat Howard; Holy Lands by Amanda Sthers; The Golden Tresses of the Dead by Alan Bradley; Early Riser by Jasper Fforde (February 12); Be My Love by Kit Pearson (February 12); Watcher in the Woods by Kelley Armstrong (February 12); An Unfinished Murder by Ann Granger (February 19); The Study of Animal Languages by Lindsay Stern (February 19); A Year in Paris by John Baxter (February 26); The Priory of the Orange Tree by Samatha Shannon (February 26); The Huntress by Kate Quinn (February 26); The Wolf and the Watchman by Niklas Natt och Dag (March 5); Wings of Olympus by Kallie George (March 5); The Revenge of Magic by James Riley (March 5); See You in the Piazza by Frances Mayes (March 12).

Although the days are still snowy and the nights are still cold, there’s nothing that will make you feel better about the weather than having new books to read! Luckily, we are in the perfect position to help you out with that! So strap your cleats onto your boots, tie your scarf up around your neck, and come pay us a visit!

We hope you all have a great long weekend! 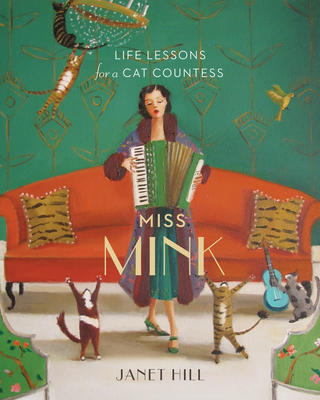 “When her life running a cat-friendly cruise line becomes a little too much, Miss Marcella Mink naturally turns to her 67 cats for advice! Their twenty life lessons are what accompany Janet Hill’s whimsical paintings in this beautiful, charming book!
My favourite: ‘Lesson Fourteen – Never let a few raindrops spoil the day.'” 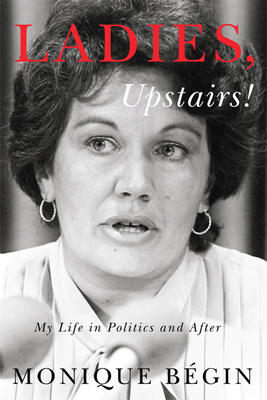 We’re so excited to be kicking off a new series of Titles@Table40 dinners (and a brand new year) with local politician Monique Begin!

Elected to Parliament in 1972 as one of the first female MPs to hail from Quebec, Begin was not only a breath of fresh air in the House, but a trailblazing female politician! Spanning her life experiences from a childhood spent in Italy, France, and Portugal, through her days as a parliamentarian and Cabinet Minister, to her post-political life as a member of the academic world, Begin’s riveting memoir Ladies, Upstairs! is a wonderful, inspiring read!

How it works:
The evening starts at 5:30pm with dinner, followed by the author presentation and book signing. Tickets must be purchased in advance at the bookstore. The non-refundable cost is $70.00 which includes the cost of the meal (a set menu of three courses with a vegetarian option), tax and tip. All beverages are extra and will be charged at the end of the evening.